I came to Japan with practically no working knowledge of the Japanese language, and a vague idea at best about what it would take to learn a language known as one of the hardest languages for English speakers. But, this was one of the things that attracted me most to APU. Even if I came with no Japanese knowledge, I should be able to hold a conversation before the end of my first semester and, if I worked hard enough, be able to take classes taught in Japanese after that. After taking French for five years in middle and high school and still being barely able to introduce myself, this seemed too good to be true. But after watching videos and reading blogs of current and graduated APU students, they all made the same claim: Even with no experience whatsoever, you will learn Japanese at the speed of a bullet train.

I looked back on my failure in French, and to avoid repeating history, decided that getting a head start on learning Japanese would probably be a good idea. I downloaded a Japanese learning app and spent the rest of my time before coming to APU intermittently studying hiragana, katakana, and basic phrases I thought I might need in my first few weeks. I must have done enough studying because, by the time I arrived in Japan, I could read and write hiragana and katakana with ease. That brings me to my first piece of advice to anyone thinking of studying at APU: Kanji can be learned here, but you should be comfortable using the two phonetic writing systems in Japanese (hiragana and katakana) to make the first few weeks easier.

Now obviously once you get to APU, you will need to seriously study in order to get through Foundation Japanese classes successfully, and everyone has their own way of studying that works best for them. Personally, I lean towards written memorization, while a friend of mine studies entirely from flashcards, and another takes pages upon pages of color-coded notes. I cannot imagine either of these methods working for me, but then again, they say the same about my methods. This brings me to my second piece of advice: experiment during those first few weeks while learning the basics, and once you find a study method that works for you, stick to it. With a method that works, you can set up a good foundation to continue learning as you hit the more advanced levels of Japanese.

My third piece of advice is to make friends with the Japanese students living on your floor in AP House. In your first semester, even if you cannot speak Japanese yet, just sitting with them in the kitchen while they talk in Japanese can really help your listening and speaking skills. For me, by constantly surrounding myself in the language, I began to subconsciously absorb little phrases or turns of speech that native Japanese speakers use in their everyday lives. Soon enough I was using them without even realizing it (much to the confusion of friends back home when we talk on the phone). By your second semester, you should have enough knowledge to hold a solid conversation with the Japanese students on your floor. This is just in time, as a new batch of Japanese students arrive in late March and will probably be a bit shy about speaking in English at first. Right now, I am in my second semester, and outside of my classes, I try my best to speak in Japanese more than I do English on a day-to-day basis.

The other benefit of this is that when you learn new vocabulary or grammar in class, instead of thinking, “I wonder how I will use this,” you will think, “This is that thing that my friends always say when talking about their classes.” Most of the time, I hear the terms we learn in class so frequently in the dorms that by the time I actually learn them in class, I have either already been using them in my everyday life or am able to start using them as soon as I walk out the door. And when I use them incorrectly, my Japanese friends could correct me and point me in the right direction. This keeps me steadily ahead of the rest of my class.

Which leads me to my fourth piece of advice: beyond not being afraid to make mistakes, you should actively try to make mistakes, and tell your friends to call you out every time you do. In the beginning, it may seem like you are saying more things wrong than right, but soon enough you will start to get a feel for what is correct, and more and more of your guesses will be on target. Just make sure to tell your friends that you want them to correct all of your mistakes, as they may just ignore it to be nice. In the long run, having your friends call out your mistakes during everyday conversation will ultimately mean that you will know the correct Japanese to use in a situation where it actually matters whether you are right or wrong.

My fifth and last piece of advice is to let the language completely take over your brain. If you are coming in with no prior Japanese knowledge like me, your first semester will consist of three 90-minute classes a day, four times a week—otherwise known as Foundation Japanese I, II, and III. You will have other courses as well, but the vast majority of your time will be dedicated to Japanese. Outside of those classes, do not let the language just sit in the back of your brain. Try to read every sign that you pass, and even translate your thoughts into Japanese whenever possible. The first time I realized that I was thinking in Japanese without even trying was one of the weirdest and most satisfying moments. I even changed the language on my phone to Japanese and try to watch as much TV in Japanese as possible, sometimes even without English subtitles.

--
When I look back at the progress I have made since arriving in Japan just a mere six months ago, I am always shocked. Currently, I am taking Intermediate Japanese, but with what I have learned from Foundation and my first quarter of Intermediate, I am able to do a part-time job in Japanese, and even frequently find myself wondering, “When was the last time I had a full conversation in English?” The feeling of independence I have gained now that I am able to conduct my life in Japan—almost as easily as I could back home—feels more worth it than any grade ever could. I hope you all get to experience the same feeling of success once you too begin your studies. 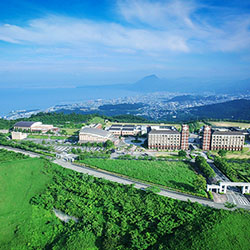 Grace Goodrich is an APS student from the United States, a member of the APU Social Media Unit, and a regular contributor to this blog. When she is not working or studying Japanese, she spends her time traveling, drinking too much tea, and attempting to go to every onsen in Beppu.