My (Not So) Golden Week 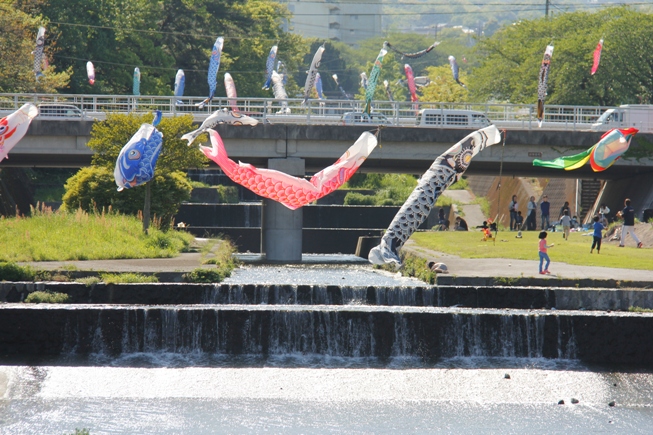 The following recounts an APU student’s Golden Week—the longest streak of national holidays in Japan—from 2017. Since the holidays fall in such close succession, most people get to take around a week off from work or school. But for APU students, it is just a regular week of classes.

The weekend is here, but unfortunately, there is no rest for the weary (or for those who signed up for an early-morning work shift). I’m up at 8:00 am—15 minutes later than planned—and quickly scarf down a piece of bread before racing off to the bus stop. I push my way in through the packed bus, as the doors close behind me. The holiday excitement fills the air as we take off towards one of the most popular destinations for families in the area: the aquarium. As my bus-sharing companions buy tickets at the aquarium entrance, I slip through the staff door and put on my part-time job uniform.

Today is Showa Day—which is dedicated to commemorating the late Emperor Showa—but for most in Japan, today marks the beginning of a week-long vacation. While good news for them, this holiday is just like any other day for me. As a staff of the aquarium’s restaurant—I fly between the dining area and the kitchen, in then out…washing dishes, serving food, and making sure that all the families out together are having a good time. Just a few more hours before I can head home and enjoy what is left of my weekend.

I am so happy Monday is here! (Not being sarcastic.) After spending the weekend serving more plates of kid’s curry than I care to remember, this day couldn’t have come any sooner. Yet here I find myself, staring out the window of the bus as it makes its way through the holiday traffic towards campus. The other cars on the road are packed with families enjoying their road trips, and in the moment I imagine that I too, am on a week-long vacation rather than making my way to media class.

Despite being considered a part of Golden Week, today is actually not an official holiday. Japan has an unusual policy that allows for days sandwiched between closely-occurring holidays to also be considered a holiday. Basically, although Golden Week only has four “official” holidays, this rule allows for a week-long, uninterrupted vacation for the Japanese people. For us APU students, classes go on as usual. And don’t get me wrong, I like going to school—just not as much when the rest of Japan has the day off.

Time flies by with today being just as crazy and jam-packed as the past few. With Multicultural Week right around the corner, it is hard to focus on anything else, let alone pay attention to what is called Constitution Memorial Day. I’m not saying that the constitution is not important or anything, it’s just that it’s hard to appreciate the full meaning behind the holiday when all my concentration is put into passing midterms and rehearsing for the Vietnamese Week Grand Show.

As the “tech guy”, rehearsal is my chance to make sure that things will run smoothly and with only a few weeks left, everyone is on edge—from the show manager to the performers. I know it is just because we have all invested months of preparation for just one week to showcase our culture and we all want to make sure it is the best possible representation of our home. Or, maybe just like me, everyone else is a little cranky about missing out on this national holiday.

Thursday rolls around, and at last I get a chance to recuperate after finishing my morning classes—and by recuperate, I mean stop by the convenience store for my favorite snacks—and then straight home to my lovely bed. But before that I will need some pocket change, so it’s off to the ATM. I am puzzled when the booth door remains closed despite my fervent efforts. It takes a few more pushes and pulls (even though the word ‘Push’ is clearly printed on the door) and a walk around the booth before I figure out the problem.

Apparently the ATM, as with the rest of Japan, has decided to enjoy Greenery Day by taking the day off. Or perhaps, it has decided to take to heart the meaning behind today’s holiday: turn off all power, appreciate the environment, and consume less energy. You would think that of all days, national holidays would be when people need money the most, but alas I give up and head home empty-handed.

It’s here—the last day of Golden Week—Children’s Day. For the majority, this means that come Monday, it will be time to head back to school or work and resume their daily schedules. But for me, it means that the weekend is finally here! While it may not be the long vacation that others are enjoying, Saturday and Sunday will just have to do as my pseudo Golden Week(end).

As I trek home, I pass by a river and am taken aback by the colorful koinobori (carp streamers) hung across the water in celebration of Children’s Day. Parents sit on the green grass watching their kids run up and down the river banks with other neighborhood kids. And while I look out at all the families I begin to realize that although I personally may not have been able to enjoy Golden Week, for many in Japan this is the only time that they are able to take off for extended periods of time, so you can bet everyone in Japan is trying to make the most of it. And while being a student at APU means that we may miss out on the conventional experience of Japan’s national holidays, what we do get to experience here on a daily basis makes up for it tenfold.

Now looking back after two years at APU, the school’s holiday policy is actually not that bad. Even if we don’t get the traditional Golden Week off, we still get two months of break twice a year in between the semesters. Personally, I prefer having this system as I can use the long breaks to go home and visit my parents or even travel. I guess in this sense you could say that we eventually get our Golden Week—just not at the same time as everyone else in Japan.

Phan Quan Nghia is an APS graduate from Viet Nam. During his time at APU, he was a member of the APU Social Media Unit and a regular contributor to this blog. He loves taking pictures of people, so if you see him, give him a big smile.