Dealing with Homesickness (and Other Stories from My First Semester)

It’s now less than a month until I leave for Japan. Got my luggage packed, flight booked, and my acceptance letter safely tucked inside a clear folder, waiting for me to put in my backpack.

It feels weird looking at how empty my room is—but, I guess this is what it feels like seeing eighteen years of your life stuffed into a suitcase and a carry-on bag.

I remembered the excitement I felt on the day I found out I got into APU. During the five months since then, I’ve wanted nothing more than to hop into the first flight to Japan. But now, realizing that time is here, and I’ll soon find myself waking up in a different bed, in a dorm room on top of a mountain in a foreign country thousands of miles away, I wish time would freeze instead.

Actually, to be honest, I’m starting to wonder if I can pull this off. But here goes nothing.

Today marks my first month of being an official Beppu resident! I'm still getting used to sleeping on the Japanese-style futon (on a raised bed) in my dorm room, and who would’ve thought following the city’s environment-friendly rules for separating trash by burnable, non-burnable, and recyclable would be a challenge on its own?!

But so far everything else has been going quite smoothly. It really helps that the people here are so welcoming—every time I pass the kitchen on my floor, there’s always someone cooking up a storm, greeting me with “Konnichiwa!” or “Good morning!”. My floormates even taught me how to say thank you in three new languages!

So yes, I'm slowly adapting to life here, but I still get a bit anxious when I remember that everything I grew up with is an eight-hour flight away, and that I will only get to see my family and friends just once in a year. But it’s comforting knowing all the other students I’ve met here are going through the same thing.

I was talking about how I’ve been feeling a little homesick lately with one of my friends, and she told me I should call my parents more often, so maybe that’ll help.

And in other news, I failed my first kanji quiz... These Japanese classes are quite a struggle for me at the moment. (I knew I should’ve taken that Japanese course back in high school!). But I’m trying to not feel too bad about it as there are still many more quizzes to go, and I'm not willing to throw in the towel just yet.

I called my parents three times yesterday just wanting to hear their voices. I guess they were just as surprised as I was. I don’t know what’s gotten into me.

I guess this is what they mean when they say, “The honeymoon phase is over,” because reality has definitely set in, and it’s hard to stay motivated. Maybe it’s the class workload that’s getting to me, or perhaps the cold weather and snow that reminds me I'm not in Jakarta anymore.

I know I'm not the only one feeling this way—everyone goes through this phase at some point after starting university. I will say that having to stay up late to meet with my Workshop team to finish our semester project was surprisingly fun though.

Maybe I should find more ways to get out and have some fun with my friends. Or I should probably join a club (or “circle” as it’s called here in Japan) or something…

Six months! I can’t believe it’s already been six months since I got here.

I remember one of my senpai (which is a convenient Japanese word to describe the older students) telling me, “Time flies when you’re at APU!” Well she was definitely right about that.

So, finals are (finally) done, and I am ready to spend the two-month semester break here in Japan. The exciting plan I have in store is basically to work everyday at my part-time job as kitchen staff at a nearby restaurant!

Honestly, six months ago, I never would have imagined that I would be able to get a job that requires the ability to speak in Japanese. Full disclosure though--sometimes I don’t completely understand what my boss tells me to do, but hey, fake it till you make it, right?

I would say my first semester at APU was a rollercoaster full of ups and downs, but I made it through. And I even passed my Japanese classes! One of my most memorable moments was definitely experiencing snow for the first time EVER in my life. (Now, I’m really grateful it doesn’t snow back home!)

But I’m happy with all the choices I made and the people I encountered. If it weren’t for my friends here, surviving college abroad would have been impossible.

I feel being here has been challenging but it has made me into a better version of myself. To tell you the truth there were days where I was clouded with a lot of doubt, but I’ve realized that I should have faith in the timing of what happens in my life. That I am exactly where I need to be, which is right here at APU. 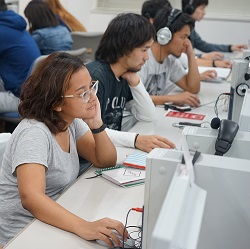 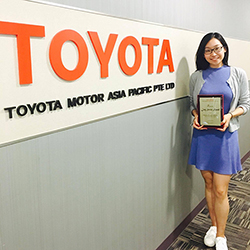 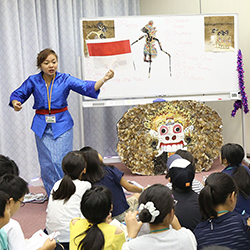