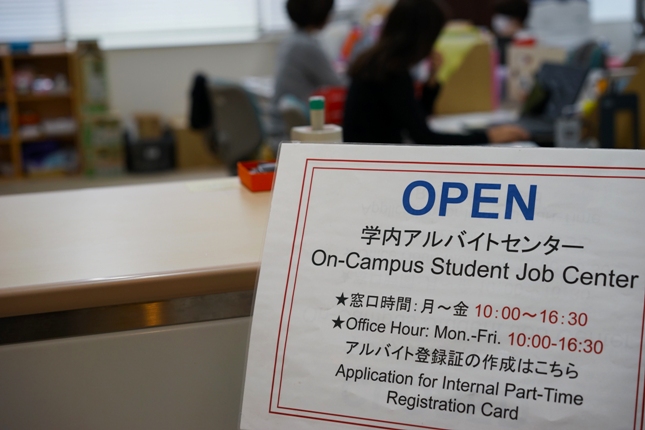 During my second semester at APU, I was faced with the ultimate chicken-and-egg dilemma: I wanted improve my Japanese language skills dramatically by starting a part-time job, yet the reality was that most part-time jobs downtown required at least a conversational Japanese to even apply. Armed only with abilities gained from Foundation Japanese classes, I knew I needed a game plan.

To give you a little background, like most other international students, I came to APU with little knowledge of Japanese language. After those first semester Japanese courses, I was able to hold simple conversations in Japanese and read/write basic Japanese characters. The more I studied Japanese, the more I became motivated to explore the culture. Getting a part-time job would let me do both: not only could I practice Japanese regularly with native speakers, but I could also learn more about work culture. (Not to mention earning some extra pocket money.)

So how to solve my chicken-and-egg situation of getting a job with limited Japanese…?

I found the answer on the first floor of Building D (aka the Media Center) in the On-Campus Student Job Center. Here I learned that in fact, there are many on-campus job organizations run by students in coordination with APU’s administrative offices. And what was even better was that some jobs did not require intermediate Japanese skills to apply. Some choices included:

After applying and having an interview, I finally landed my first part-time job on-campus! I officially became a member of Stop Tobacco On-campus Project (STOP). STOP is an organization working to decrease the rate of smoking on campus, improve smoking manners of students and keep campus clean from cigarette butts.

Although I am no longer working for STOP, thanks to the experience, I not only enhanced my language skills but also came to realize that successful projects result from effective teamwork and efficient time management.

But what do “effective teamwork” and “efficient time management” mean, exactly?

Specifically, I believe that 3Cs (The Golden Rule) - Communication, Cooperation and Coordination -are three keys to effective teamwork. Like most of APU’s student organizations, we had members from many different countries and regions working together: Japan, Indonesia, Viet Nam, Uzbekistan and so on. With diverse cultural backgrounds and working styles, disagreements and misunderstandings could only be avoided by making sure we followed the 3Cs.

I still remember one of the first team meetings I attended where the importance of the 3C’s was quite apparent.

I was trying to convey an idea in Japanese in front of the other members. My heart was pounding, my face turned red and my eyes started tearing up a bit. I was so nervous that I could not help crying, literally. However, nobody laughed at me. My teammates were all listening very patiently; the Japanese members kept nodding their heads and helping me out with words.

We gave the same support to Japanese members when they tried expressing themselves in English. We wanted to ensure that, during meetings, opinions are welcome in both Japanese and English so that communication and cooperation within the team could flow smoothly.

After every meeting, a student representative was in touch with an APU Student Office staff member to report what was discussed and seek for help when necessary. Thanks to this close coordination, STOP successfully launched several projects that led to a decreased number of smokers and cigarette butts on-campus.

While carrying out a project or a task, we also tried to put horenso—a Japanese problem-solving system—into practice. Ho-ren-so (報・連・相) refers to hokoku (report), renraku (contact) and sodan (consult). This is easy to remember because it is a pun – horenso actually means “spinach” in Japanese when written in different characters.

To give an example when horenso was helpful in solving a problem, there was one time, right before an event we had been planning that I could not find my STOP uniform t-shirt anywhere. So, I followed the horenso concept.

I immediately reported the issue to the team’s Facebook group and consulted with other members to get their advice. I also contacted the team leader to confirm if I still could join the team without a t-shirt at the event. After taking these actions, the problem was solved very quickly as a member who could not participate in the event kindly lent me her t-shirt.

Since information was shared equally among the team, the horenso approach helped us keep multinational members in close communication with each other and embrace a sense of trust through this kind of collective decision-making.

Oh, but don’t let me forget about time management.

I believe APU students, including myself, are generally busy, and no day is the ever same at APU! While working part-time on campus may sound very exciting, as a university student, studying remains my first priority. Therefore, it has been crucial to create a weekly schedule to balance study and work.

On weekdays, I usually focus on doing homework and reading assignments. On Wednesdays and weekends when I don’t have class, this is when I devote my time to meetings and working on projects that are related to my on-campus jobs. Thinking ahead, making a schedule, and following through is the path to time management success.

I suppose I still don’t know the answer as to whether the chicken or the egg existed first. But I am proof that it is possible—at least at APU—to find a part-time job on-campus even before you speak advanced Japanese, because this is a community where diversity and bilingual communication are highly appreciated. So what do you say? Wait no more—go for it! 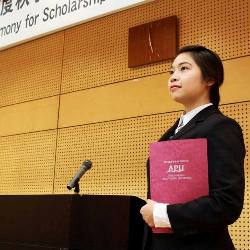 Duong Thi Bao Anh is an APM graduate from Vietnam. During her time at APU, she was a member of the APU Admissions Social Media Unit and guest contributor to this blog. She is a fan of cooking shows, and she also likes cooking Vietnamese dishes with friends, discovering local restaurants and trying new cuisines from around the world.