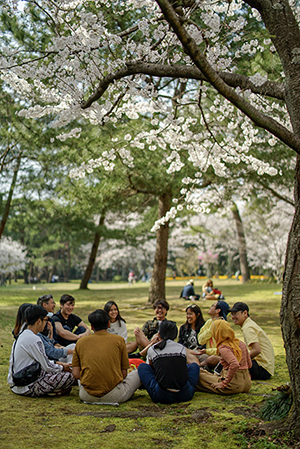 With spring upon us, I can’t help but think about the seasons back home. In the US, the change in seasons is less about weather and more about if it's football, basketball, or baseball season. In Japan, however, and especially at APU, the four seasons carry a more traditional meaning, with each having a particular characteristic—the humming of cicada during summer, crisp colorful leaves in the fall, gently falling snow in the winter, and a personal favorite, blooming flowers in the spring. One only need stroll through campus to see the proverbial proof in the pudding, but of course, spring is more than just flowers and good weather.

In southern Japan, cherry blossom season, or better known as hanami (花見 ) season, usually starts in at the end of March and lasts until mid-April. In fact, the name hanami comes from the two words hana (花) meaning “flower” and mi (見), meaning “to see”—which literally means flower viewing. While cherry blossoms are by far the crowd favorite (To be fair, if you have seen some of the tulips blooming on campus, they could very well be considered a strong contender.), there are also a wide variety of other flowers also blooming at this time. Additionally, hanami season is a time when we store our winter clothes and step out from hibernation to enjoy leisurely days complete with picnics, selfies, and enjoying nature. I myself am lucky enough to live near a river in Beppu and often look out my window to see children running around, and groups of people sitting under the long branches of cherry blossoms enjoying one another’s company.

Beyond the immense beauty, this season also holds significance in Japanese culture, with events and festivals held in tandem every year. In Beppu for example, we have the Beppu Hatto Hot Spring Festival, an event that numerous local residents—including APU students—take part in to celebrate the abundance of natural hot springs (onsen) found throughout the city.

It is also said that this season serves as a reminder of the fleetingness of life. Cherry blossoms begin blooming as the cold winter chill slowly melts into warmer spring days, but the beautiful blossoms are short-lived as their petals fall away with the wind and rain in the following weeks. Though the blossoms may be fleeting, they are precious and beautiful. Similarly so is life, and for us students, our time here at APU. However, as we near the end of the hanami season, rather than mourn its closing we celebrate a different meaning—new beginnings!

In Japan, for instance, spring is the start of the new school year. Recent graduates begin the next chapter in their lives as new employees and make their way out into the world for their first day of work. APU students like myself, look towards April with renewed strength (courtesy of a well-deserved break), which is needed to tackle the upcoming semester and hopefully start off strong. Moreover, we also welcome to APU new students in both our undergraduate and graduate programs from dozens of countries around the world!

With the fresh starts ushered in by the falling cherry blossom petals, I encourage not only myself to go and try new things, but for all of us to put ourselves out there—it’s the season after all! It is a chance to join new circles, get better grades, and maybe even make new friends this coming semester! Besides, if you ever feel even a little overwhelmed, do yourself a favor and take a break under a sea of pink trees.

The photo featured in this blog is courtesy of APU student Andra Khalifa.

Lorna Probasco is a dual-degree APS student from the United States. During her time at APU, she was a member of the APU Social Media Unit and a regular contributor to this blog. Born and raised in the Texas (USA) desert on the border of Mexico, she describes herself as being much like a cactus; a little thorny on the outside, but resilient and seriously cool.